I look up, movement catching my eyeballs. There. Scurrying across the wall. A gigantic nightmare of a spider. Big. Big spider! It’s minding its own bee’s wax. It’s just boppin’ along, doing spider shit, in other words. Not trying to scare the bejesus out of me. Not that I am all that scared of spiders but still. The spider I watch has the dimensions of a horror movie arachnid. That is, to use modern parlance, a big-ass bug. Yes, I know a spider isn’t a bug, thanks. But we’re stupid now in America and proud of it for some reason, so…ahem. Let’s return to the precious retelling of my Spider Tale, shall we?

It makes its way to the shelves. The colors of this beastie are brown and gray; I wonder if the name is Charlotte. If you don’t get that reference, just a big hearty gol DARN it.

I cannot bring myself to load the rifle and take that spider out. I cannot turn into a good gal with gun; Wyetta Earp sleeps yet far in the corners of my Wild Or-ee-gone soul, curled up and waitin’ for action, a’course. That spider freezes when it notices me noticing it. We contemplate each other. No, Sirius-ly! I stared, the spider stared, we both stared. I also talked to that arachnid that probably wished my actual death.

Read the following in the same voice you talk to your pets or stuffed animals or pet rocks when you think no one is around: Hey, look at you. What are you doing, spider? No, go back up toward the ceiling. There you are! How would you solve the Middle East thing? Who gets a worse rap, spiders or clowns? Would you get behind a gritty reboot of the Twilight movies? Do you hang out with a pig named Wilbur? [Gol-DARN-it if you don’t get that. I just can’t. Shut my head. LOL.]

Some sort of lesson happens. I learn something. The spider learns something. Nature versus inertia. I get my camera and try to get pictures. Because I’m batshit crazy at this point in my life. I find real delight in a spider that obviously bathed in some nuclear waste. I had happy moments watching this small life trying to get from whatever point A was to Point B. There’s a clear trajectory for that spider, an arc. There’s a story there, surely!

And here’s the kicker.

I did not see where that spider went.

That spider could be anywhere.

That spider could be watching me, right now.

Wondering why I bothered it and pointed a little square at it. Perhaps sharing tales of the weird human with the other giant house spiders. Or the outside spiders that live in the rocks and trees and discarded bits of machinery.

My brain tells me to stop. It’s just a fucking spider!!! Arrrr!!! Are you going to turn some stupid spider into a billion-selling YA novel centering around a typical male character saving the day except you named him Marsha because it’s fashionable right now to have a female ‘heroine’? It’s cute! Oh look, a ‘strong’ female! That’s like hot ice and wonder snow and– SPIDER!

My my. Must read some positive memes and just cure myself of any modern malaises. Whee. Wahoo. Whoop a do.

I had a week. It was. Um. That spider delighted me. I ‘worked’ on my ‘zombie’ novel, experienced nature without leaving my seat, much, and tried to ignore the outside world.

Oh, hey, my book/s are on sale RIGHT NOW. Buy one or several. Thanks. Look at me, being all  Willy Loman!

There’s also a new poetry challenge to tackle! I see the words ‘Jesus’ and ‘ass-licking war dogs’ in my future! 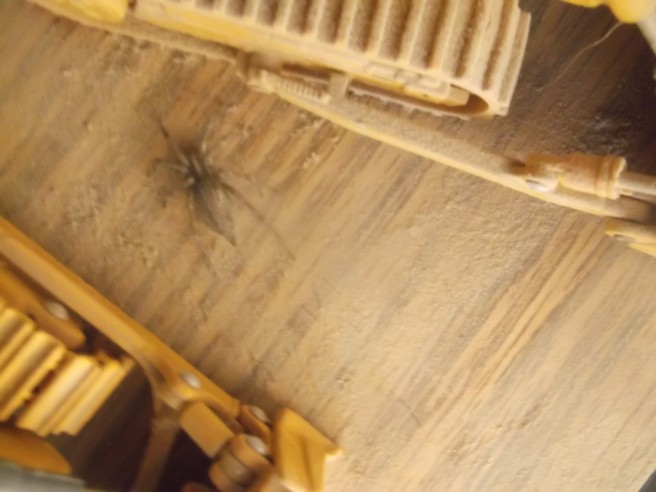