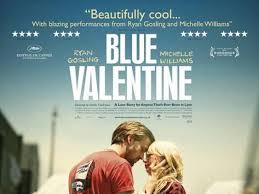 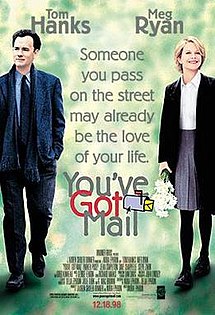 I have tried for a week to get into Blue Valentine. I don’t find it heartbreaking. I find it annoying. I’m not watching a delicate relationship dance being played out by two trembling souls on the verge of self-realization about wuv. Eh. I’m watching two sullen lumps mope about, wishing they weren’t married to each other.

I’m not charmed at all. There’s a kid. The family dogs gets found run over on the side of the road in the first ten minutes or so. After that I checked out.

Jen or Cindy or whatever, comes across as Kristen Stewart without the sparkling personality. Stewart from the Twilight movies, that low-energy, barely a facial ripple, smiling and frowning same twitch of lips.

Michelle Williams can act, I guess. I’m not really a fan. It seems she plays the same role over and over. Sad girlfriend/wife type. She seems to have one range. Which is– Sad. She does sad and it pays her bills. Go American dream, go! The American dream is alive and well when a person can make a living expressing a sad face a lot. Hallelujah!

I’m not that big of a fan of Gosling, either, for that matter. He’s the indy Mope Man. My opinion! But he does have actual range. I did like Lars and the Real Girl. Do not judge me.

I did love his SNL sketch on alien abduction, where Kate McKinnon got everyone there to break character with her version of what happened on the spaceship. It was kinda nice to watch Gosling snicker behind his hand as if they were in some high school play and somebody had farted.

But here, in Blue Bore, er, Blue Valentine, it seems the love of his life just settled for him, and finds him repulsive now. His character, George, Bob, Fernando? has all the charisma of a smashed banana peel. Ashley or Madison, whatever her name is, does a lot of sad faces around him.

He’s ACTING away at her, she’s giving back sad face. That’s about all I’ve gotten from this movie so far. BREAK UP ALREADY, YOU CRAZY KIDS. I should be weeping and begging this on-screen couple to make it work, right? Ugh.

I then popped in You’ve Got Mail, because I found it at the thrift store. Where I also found Blue Mopentine. Er, Valentine.

Cranky whiny Meg Ryan, charming affable capitalist gentleman Tom Hanks closing down her bookstore, and she falls in love with him. But!! But we do see why she would. He’s quick on the draw, he’s eye candy, he’s very New York-ish. He’s also non-threatening, not creepy while still being obviously straight guy who’s probably okay in bed. Not freaky/hot/scary/spank me again, daddy level but more, well, not that sort of guy.

Great. Now I have Tom Hanks dressed up in dungeon wear, with a cat-o-nine tails, ready to go. Stop it, brain!! No, do not show me the little airless room where Hanks cracks that whip and whispers to get in position, whore.  Do not ruin Tom Hanks for me!!  Bad brain!! I’ll make you keep watching Blue Mopentine! Okay, then.

–Now, do I keep that above in or erase it so no one has to suffer that image as well? Ha ha, suffer all one or two who read this! Suffer! Or not. —

Back to You’ve Got Male. Deliberate use of male for mail. In case you were wondering.

I don’t understand why he’d fall for her…as she does nothing but insult him to his face, but they do share a sort of chatroom/email intimacy. [[She’s skinny and blond, so of course he adores her. Yeah, there it is.]] Where he gets to read the ‘real’ her. He also knows most of the movie that she’s his internet pen pal, she has to find…ah. It’s so romantical! He has all the power here!! Just so romantical!!

That’s not a real word. I know, computer spell check. I know. Thanks.

If you haven’t seen this 90’s very chick flick, well! It’s based on the Shop Around the Corner, with Jimmy Stewart. I found that movie a lot cruel. I find You’ve Got Mail a bit cruel as well. I did mention I don’t have Netflix or Hulu, right? Because I’m poor? That’s why I’m not binge-watching Bob’s Left Elbow or whatever the newest series is that just got downloaded for binge purposes.

Oh well. At least I have nearly all of Glee on DVD! Life is barely tolerable!

Also– dial up! DIAL UP was yet a thing in that movie. Cute! I do remember dial up, waiting for the big fancy computer to hook up to that crazy internet. Waiting. Waiting. Waiting. Waiting. Then having to try it again. Maybe it would hook up. You had to hope others were not also trying to hook up, as that slowed connection speed way way way down.

No, just kidding! Not really.

So, I’ve been wanting to see Blue Valentine. I’ve heard how GREAT it was. For me, not so much.

I hope I can finish it. I don’t want to. My life sucks, as the kids used to say. I don’t need to wallow in two people’s shallowness, rolling my eyes a lot, sighing those gigantic disgusted sighs you do, while wondering if I should just burn the DVD as an offering to the writing gods.

What does any of this have to do with writing, my writing? Or  MY novels, plays, poems or essays against man’s inhumanity to man? Not a thing, darlings. Not a damn thing.