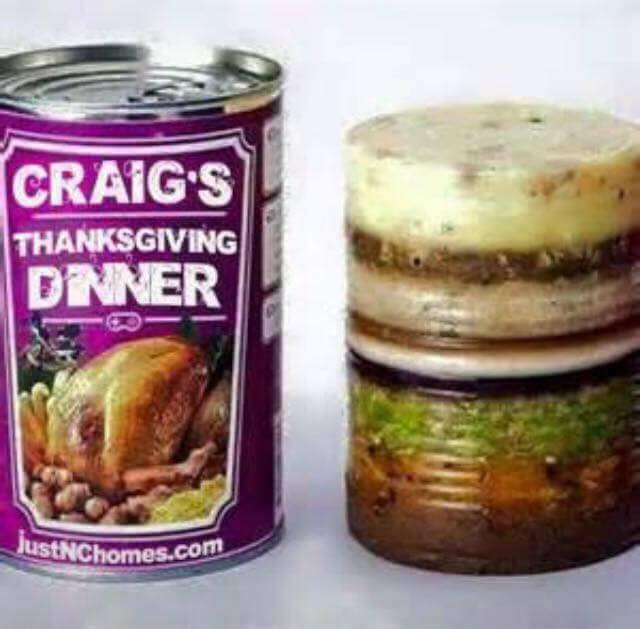 Gee, it’s time for yet another American holiday festival of festivus.

Now I think that serving an entire ginormous dinner from a can would be…just fine. Sure, it would be hard to capture that home-made taste that some aunt or even grandma can imbue to rolls or stuffing or even that green bean casserole delight with the mushroom soup, the weird greenish beans and the crunchy onion thingies…but hey. Times change and sometimes holidays should be reduced to a simple empty a can into a bowl and call it good day. Clean up, a breeze. Taste? That’s what salt and ketchup is for. Family time? Kept to a brutal minimum. Getting to return home and pretend it all never happened? Priceless.

The green layer up there is what actually intrigues me. What is it? Jello? Peas? Lime Jello with peas, salad, sprouts and green beans? Beneficial mold in case the other layers make you sick? An illusion created by Hilary Clinton’s crack team to lull me into…? A layer of mint frosting?

I took a shower yesterday so I’m good that way, thanks for asking.

The dogs are happy. It’s foggier than some old movie about Jack the Ripper out  there today.

Happy day, however you celebrate or don’t.

You might not be American or Canadian. There are other countries and places out there!! It says so on Google. Or is Google just fake newsing me??? Oh pluck my cranberries and spank my polite scoop of that orange gunk smothered with burned marshmallows.

I’ve heard outlandish tales that Canadians have some sort of purloined America-invented-Thanksgiving-Hello!! feast day. America also invented the cat, walls and sweaters for dogs. That was before the Illuminati stepped in, those damn globalist liberal social scumbuckets! I must prepare myself, now, for total family speaktalk. Make fun of them in my head or die a slow, awful death on a lonely liberal cross in Republicanland. Mmm….

I survived, I am still here and yet there’s Christmas to get through with two sets of…oh fuck me running. Anyone remember that phrase? Is it from the Eighties oeuvre of cuss words and cuss slang? Mostly the food was white. White turkey, white scalloped taters, white bread rolls, creamed corn, creamed cauliflower. All very good, by the way. The cabbage slaw had a nice green quality to it. The talk tended toward how everyone but the one holding forth was cataclysmically stupid. It never veered over into, ahem, but then again I zoned out and watched the squirrel dart back and forth on the backyard fence top. Go squirrel!

Today I whipped up a turkey casserole, with noodles, turkey, celery and carrots, sauted onions and almonds, fake instant mashed taters and a sort of hybrid sauce/gravy. Oh and some leftover sharp cheddar already-grated cheese! And– I did a quickie pie. I feel a bit dirty. Quickie press in the pan crust and quickie butterscotch generic pudding with not-Cool-Whip dessert topping to finish that thing off in grand and goodly fashion. I put a dollop of honey in the crust I whipped up. As we have jars of honey and since it’s there, I fling honey into, well, whatever. I’m a very much whatever is in my surroundings goes into whatever I’m cooking. Tiny dab of Ranch dressing left in bottle, mystery seasoning from three years ago, is that a carrot? oooh I forgot I bought tarragon…etc and etc and etc.

I’m also chest-deep in a Garrison Keillor book and snickering to myself at odd moments. Happy Lutherans! Dark Lutherans! Jokes about Ole and Lena! It’s all in there. I think it’s called Wobegon Boy. But don’t quote me on that. [Note: this was written before allegations of wrongdoing came out about Keillor. History, your turn.]

Thou art now caught up and I should enjoy this oddly gorgeous day. We nearly hit seventy here in Eastern Oregon/Western Idaho yesterday! And yet fog and rain. Oh I’m visiting with myself now about the weather and some stupid ass casserole I threw together out of this, that, the other. Fudge bunnies, somebody tell me to take up the slack in my fingers!

Oh before I go and um, I dunno, stare at the wall, is anyone watching that travesty over on PBS that purports to be Anne of Green Gables?? It’s…oh. I. Oh. Why would someone deliberately write Montgomery’s characters so badly? And who did the casting??  Martin Sheen as Matthew?? NO NO NO NO!!! The girl playing Diana Barry…has golden-brown hair. Dye her fucking hair black, you nimrods. Miss Stacy?? What the hell was that?  Also…Gilbert? WTF is that about? That fight between him and Anne in the book/s…I just feel a need for massive amounts of vodka and access to that set of writers so I can both drunkenly sob that they’ve ruined Anne of Green Gables and slap the shit out of them for whatever agenda they felt they had to follow here. Was it, ahem, Satan? Did Satan personally show up and offer you happy virgins and a mountain of gold if you twisted Anne and Company into actual shreds of what they once were? Can you unsign whatever bargain here? Thanks.

This was not the Kevin Sullivan version, which was fantastic. It’s not the one with Megan Follows. You know, the real Anne of Green Gables and the sequel, Anne of Avonlea. No no, this is some ‘new’ version! Why?? Stop mining ground that’s already been mined! There are so many stories out there! So many great books and tales that…ugh a bug a shug a rug.